Three approaches to measure granular LTV in a SKAdnetwork era

In this post we’ll look at specific solutions around this, covering:

SKAdnetwork presents a big challenge when calculating a user’s actual Lifetime Value (LTV) at a granular level across channels. This matters, because LTV is a fundamental metric for growing consumer mobile apps. So, what are the challenges?

Before going further it’s important to define what we mean by deterministic and probabilistic attribution:

We caught up with MetricWorks CEO Brian Krebs, Incrmntal CEO Maor Sadra and Algolift by Vungle GM Paul Bowen to explore probabilistic forms of attribution that fill gaps left by SKAdnetwork’s limited deterministic attribution. So let’s take a look at the three solutions we identified to measure LTV in an SKAdnetwork era.

This is the most simplistic form of LTV attribution. It’s something you could design yourself with very little data science resources, however, it delivers more directional data rather than a high degree of accuracy. This naturally hampers optimisation. It’s also last-touch, so it only gives credit to the last-interaction before a conversion rather than distributing value across all touchpoints influencing a conversion.

It starts with two data sources:

You can then assign users into clusters based on behaviour in the first 24 hours post-install and geo data, then linearly assign revenue to each channel based on the number of installs in a cluster. The more clusters you have the more accurate you can get:

For example, you could have a simple single cluster and model revenue by the volume of installs: 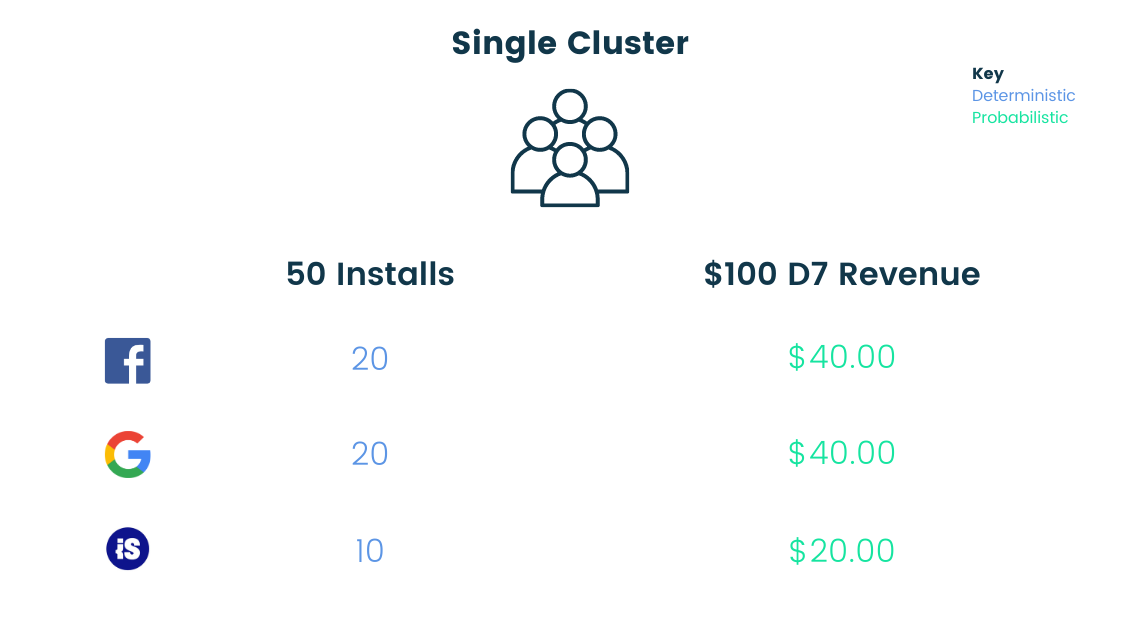 Obviously, this treats all installs as equal. It ignores the possibility that different channels and campaigns will deliver a different quality of install.

So you can use the 24 hours of conversion actions (e.g. made a purchase, invited a friend, tracked exercise) to break users into two clusters:

This then starts to recognise that different channels are driving different standards of users. However, not all conversion actions are created equal.

So you could break down users into more granular clusters by the value of actions they’ve completed: 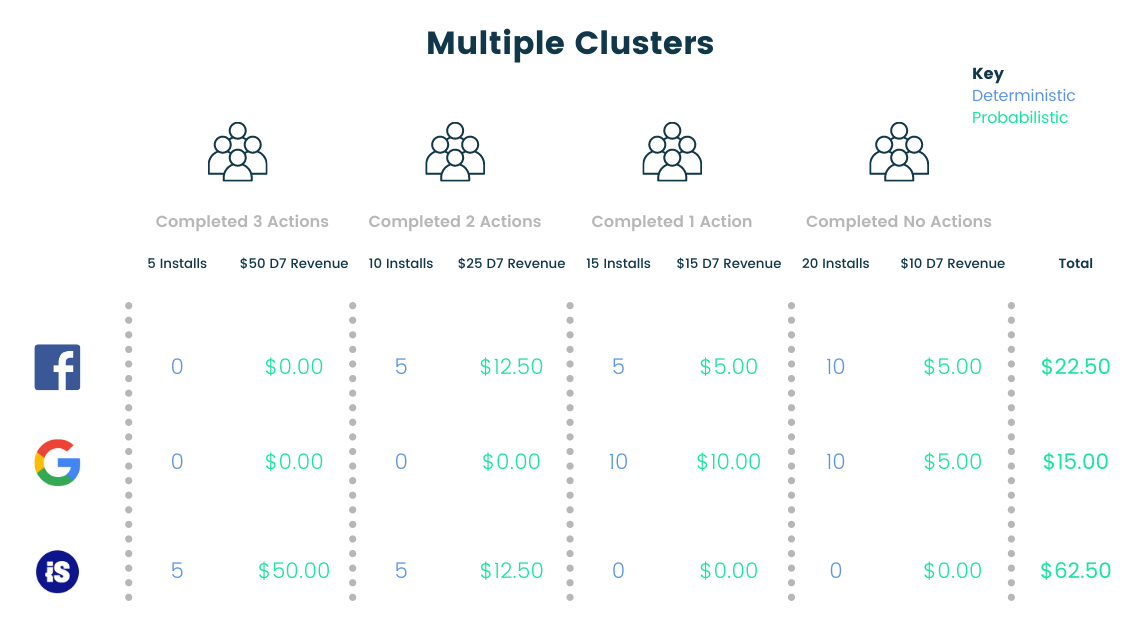 Naturally, the more you start to segment the more accurate LTV distribution is likely to be when you compare it to historical deterministic data at the channel or campaign level.

One thing you might find at this point when you validate against historical data is that you’re over-reporting organics. You could apply a consistent percentage adjustment to fix this and move more value to paid channels across the board. This will likely get you closer to 90% accuracy.

The other issue is that SKAdnetwork randomises the install timestamp within a 24 hour window so the install data could be out by a day and impact the redistribution above when looking at daily figures. The longer the date range used when doing redistribution, the more accurate it will become. If you look at it across 7 days, you’ll likely get to 80%+ accuracy.

Teams who have limited data science resources and want directional data that they can implement quickly and easily. Also, a useful starting point as a basis for building your own model.

Probabilistic redistribution builds on linear redistribution, increasing the accuracy using more input signals and Machine Learning (ML) algorithms. Algolift have been fast out the gates with a probabilistic last-touch attribution solution for the SKAdnetwork era and we caught up with their GM Paul Bowen to understand a bit more.

A key component here is SKAdnetwork’s 6-bit ConversionValue. The folks at Algolift are working with customers to build an optimum use of the ConversionValue as a proxy for LTV and there’s a lot of detail on that methodology here. However, at a top-level Paul shares:

“For example, a game would likely use ConversionValue as a day 1 revenue contribution. You would use 1-bit to define day 0 or day 1 and then the other 5-bits would be used to create 32 buckets of day 1 revenue e.g. $0, $0.01-$2, $2-$5 etc … This means that for every user who installed yesterday you have them in a day 1 revenue cluster. We then use that value to match users from the anonymised user-level behavioural data with SKAdnetwork data with a probability that they came from a specific campaign.”

This is where opted-in deterministic data from MMPs can be used by assigning them a 100% probability of belonging to the campaign which they’re attributed to. For SKAdnetwork users, a percentage of the revenue that the user generates is assigned to the campaign based on the probability of them belonging to that campaign. The output is then a predicted day X Return on Ad Spend (pROAS) by campaign and channel at an aggregated level. The key thing here is that this is at an aggregate level, because the use of probabilities of a user belonging to a campaign mean that at a user-level the data wouldn’t be accurate. However, when aggregated at a campaign and channel level accuracy increases, likely beyond that of linear redistribution.

This raw data output can then be used to feed into your existing BI infrastructure or a tool like Appsumer.

It’s also worth noting that whilst Algolift is grounded in last-touch probabilistic attribution they also offer top-down incrementality. We’ll go on to speak more about this methodology, but they use it to look at things like the uplift which organic receives from paid user acquisition.

Teams spending upwards of $5k per a day in the gaming or subscription app verticals who want to continue optimising to ROAS at a campaign level. If you’re going to try and build this yourself you will also likely need some data science and engineering resources to implement it.

The big difference here is that it’s not looking at last-touch distribution. As deterministic data disappears, incrementality – which is widely used outside digital advertising – is a completely new way of looking at things. It spreads revenue credit across channels that have a causal impact on influencing revenue. Models are very sophisticated and require significant data science expertise and time to master. MetricWorks is the vendor who has focused on using purely top-down incrementality to deliver LTV by channel in an SKAdnetwork era and Brian, shared some insights on how this works.

Econometric models are a statistical technique used in economics to help describe economic relationships. For example, an economist might want to understand how average wages are affected by economic growth. They could use econometrics to help describe that relationship, showing how much average wages change when the economy grows. And they could then use that to forecast changes in wages, based on how they expect the economy to grow. These same techniques can be used in mobile advertising. For example, to show the relationship between how you spend on video ad networks and changes in revenue via Apple Search Ads or organic.

MetricWorks’ econometric model has learnt across multiple advertisers to improve accuracy. However, unlike last-touch solutions it’s not possible to validate against historical deterministic  data as that all uses last-touch attribution. To validate accuracy for an advertiser, ground truth tests are used via Interrupted Time Series (ITS) experiments. Brian explains ITS experiments in their simplest form as:

“You don’t mess with any variables e.g. bids, budgets, in-app flows or promotions. During a test period for say three days you turn off some traffic e.g. a campaign, geo or in an extreme test an entire network. You then compare the baseline of what would have happened if you hadn’t paused the traffic and what actually happened during the test, this is called the “counterfactual”. Through causal inference you take the difference and that’s your ground truth.”

This is then compared to the models to validate them. The other advantage of doing ITS experiments is that they enrich the econometric models for you to improve accuracy. MetricWorks don’t require ITS tests to get value given they require switching off some revenue, however, they do validate and enrich MetricWorks’ models to give you more trust of the data. 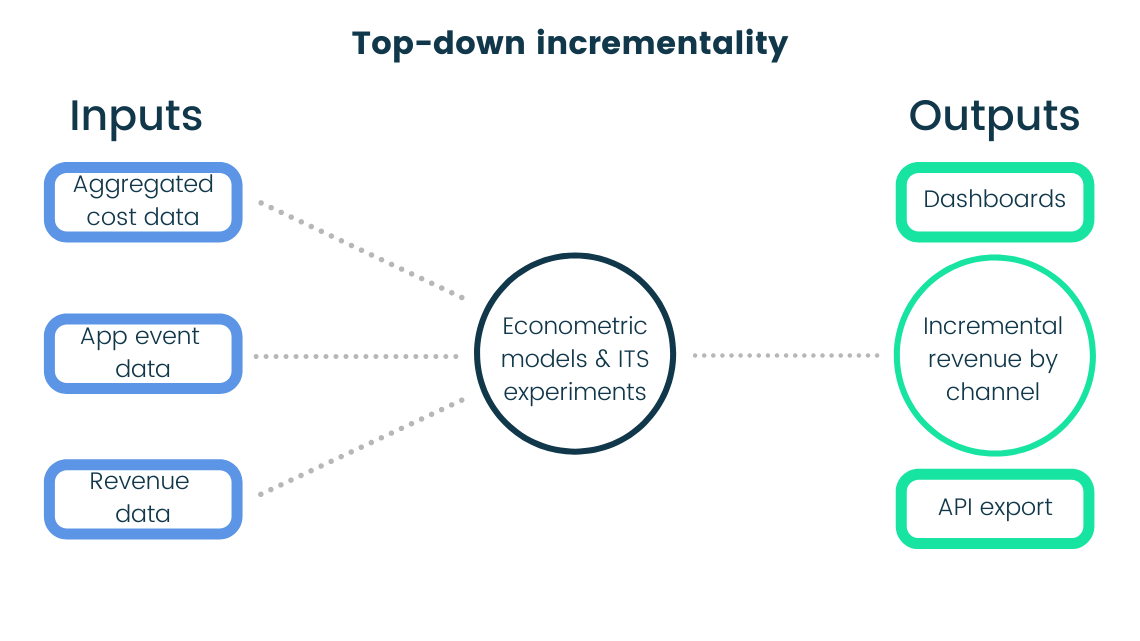 From a data engineering perspective everything is ingested via APIs or for custom sources it will need to be delivered to a data warehouse. Once the models have done their work the data is delivered as dashboards or can be pulled into your data warehouse or tools like Appsumer via an API.

Gaming brands who aren’t satisfied with last-touch allocation. You would also need either a very significant data science team to build models or budget to invest in an out-the-box solution.

There’s been a lot of noise around solutions for revenue attribution in the SKAdnetwork era. Hopefully, we’ve managed to cut through some of that noise and highlight where different approaches are applicable with a taster on how they work. It’s also worth noting that no solution will deliver the same accuracy as deterministic data given the probabilistic element, so it’s important to get comfortable with that from the get go when evaluating solutions.

One solution we haven’t spoken about much is Incrmntal, that’s because they aren’t directly solving the specific problem of attributing revenue to channels or campaigns. As the name suggests they are using incrementality, however, their focus is more on using ML models and causal inference to make optimisations recommendations based on incrementality findings. These recommendations are delivered via a Trello like interface. We’ll cover them in more detail an upcoming post on incrementality.

The reason we care about informing you on these solutions is because they’re all integration partners and we’re working on ingesting their or your own modelled data into our data pipeline. This is so that we can deliver richer findings in Appsumer’s dashboards and reports as part of our new SKAdnetwork reporting and modelling solution, which you can read more about here. Hopefully it’s helped and we look forward to working with all these fine folks in the coming months to deliver you rich SKAdnetwork insights.